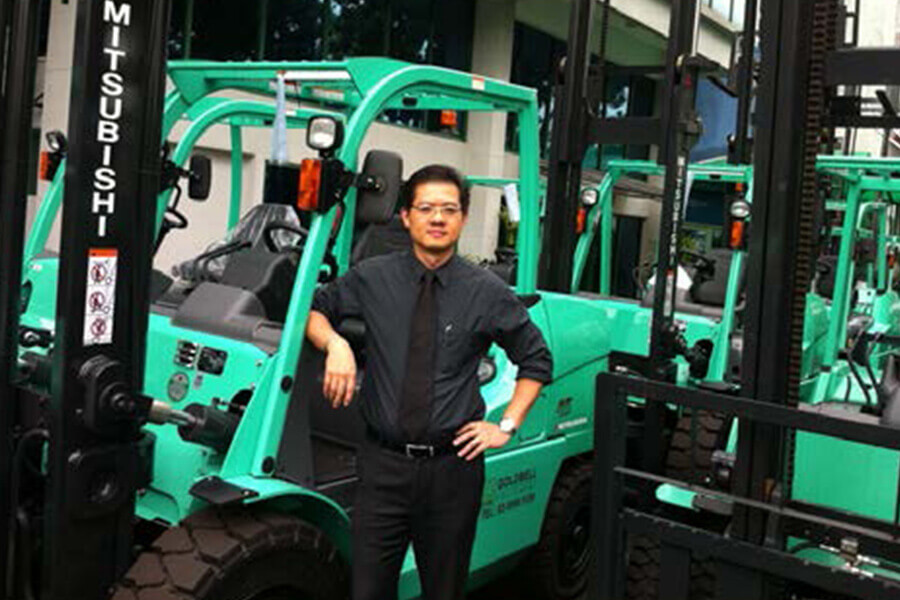 In April 2011, Goldbell Equipment Sdn Bhd was officially established as the exclusive Mitsubishi forklift dealer of Malaysia. A period of six months was all they needed to embark on this new establishment.

In April 2011, Goldbell Equipment Sdn Bhd was officially established as the exclusive Mitsubishi forklift dealer of Malaysia. A period of six months was all they need to embark on this new establishment. Mr Ang Yoon Ping, Assistant General Manager of Goldbell Equipment talks to MCFS about the important lessons of this distinguished build up. When asked, what are the main concerns of Mitsubishi forklift customers in their brand awareness, Mr Ang commented that “less confidence was seen among its customers due to the constant change of dealership for the past ten years”. The high turnover rate and the low resale price made it even tougher for GBE to regain their customers’ confidence in new management image and sustainability.

To accelerate the momentum of their customers towards greater confidence and increase brand awareness, GBE is now looking at bigger plans to improve their operational efficiency and thereby contribute to their company objectives. In the year 2011, marketing campaigns like email marketing was introduced as an advertisement and promotion channel to reach the public. With a target to reach 160,000 audiences, GBE ensures that this execution plan will help to establish both Goldbell and Mitsubishi Forklift Trucks brand name. Below are some advertisements created by GBE as their marketing tools:

Innovation ideas like ‘5 Top Reasons To Rent Forklifts’, ‘Why Own Your Forklifts When You Can Rent?’, ‘Call Us Before You Lift’, and the invitation of potential customers to take a tour of Mitsubishi Forklift Trucks factory in Dalian, China acts as an ideal mix for GBE marketing effort.

Yet another attractive channel is the ‘Mitsubishi Treasure Hunt’ campaign which was created with the objective to improve equipment rental, before and aftermarket sales. Rewards are given to those who trade in their old forklifts and rent or purchase a new Mitsubishi forklift truck, those who sign up for preventive maintenance contract and for those who overhaul their forklift trucks’ engines. Mystery gifts are also rewarded to those who give off their Mitsubishi forklifts of more than 6 years of age. Newsletter for promoting Mitsubishi Forklift Trucks and product advertisements in newspapers and trade directory are also among the few strategies GBE used as their business focus.

In years to come, GBE has already made a roll-out plan of activities and programs in the pipeline. Preparation is the key and is often demonstrated by the organization as GBE believes in giving their best shot. With the launch of their new premises, GBE continues to seek marketing efforts such as the opening event of ‘Re-think, Re-look and Re-strategize’, ‘Safety Campaign Day’, media publicity in newspaper and webpage and even financial programs to induce additional sales.

In order to find the right solutions, the reassurance from Goldbell Equipment Sdn Bhd, for their customers has exhibited the willingness to provide awareness for their new developments. The flexibility and capability executed by GBE further made them a committed and trustable organization.